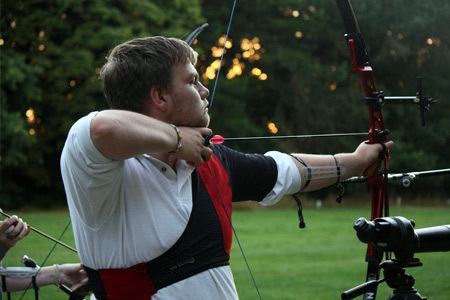 I started archery technically when I was 8 years old but was always down at my club The Bowmen of Bruntwood. The reason I started archery was my grandad, he had lost both of his legs and needed a sport to keep him active so he chose archery and ever since then he's taken to it and been my coach from day 1.

Since growing up I have found myself shooting alongside coaches and athletes which are by far the best in Britain such like Charlotte Burgess, Tom Williamson, John Stubbs, and Keith Gascoigne. These people have really helped my push to what I'm aiming for but I can't forget my family .My family have been the biggest influence driving me to shoots and training camps...

I am now a part of the TASS (Talented Athlete Scholarship Scheme ) which is run by Sport England. We train and work alongside the best archers in Britain now... And what an experience it is... I can't thank everyone enough for the help they've given me... So now for 2015 is my biggest year yet I am competing in the Archery GB National Series stages 1-4 and many other high ranked shoots.

The support everyone at ARTEBO has given me throughout the two years is outstanding and I wouldn't change it for a thing.